Almost 95 percent of the park's 747,956 acres (roughly the size of Rhode Island) is classified as wilderness.

Things to See and Do in Yosemite National Park

Yosemite National Park offers an abundance of activities and sightseeing destinations. Yosemite is best known for the massive granite cliffs and domes found within the park.

Perhaps the most famous sight in the valley is the granite monolith of Half Dome, a mountain whose sheer face and rounded top looks like a giant stone dome that has been split in half.

The Valley is a 7 mile wide canyon with incredible rock formations, including El Capitan, the world's tallest granite monolith and one of the world's top rock climbing destinations.

Equally famous for its waterfalls, Yosemite Falls is one of the highest waterfalls in the world at 2425 feet, and is most impressive during the spring months. Bridalveil Fall is another easily accessible waterfall, while Nevada Fall and Vernal Fall can be reached by those willing to do some hiking.

The park is also known for its Giant Sequoia trees, which are estimated to be over 3,000 years old. Efforts to protect Yosemite Valley began as far back as June 30, 1864 when President Abraham Lincoln signed a bill granting Yosemite Valley and the Mariposa Grove of Giant Sequoias to the State of California as an inalienable public trust.

This was the first time in history that a federal government had set aside scenic lands simply to protect them and to allow for their enjoyment by all people. 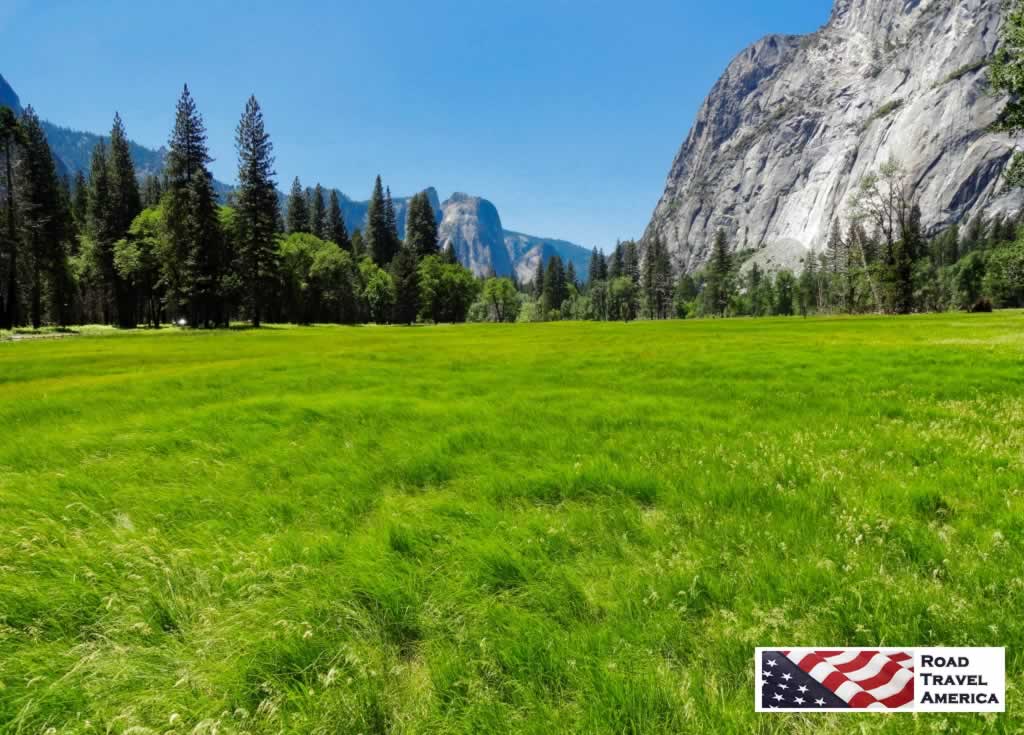 There are four major entrances into the park. All of these routes are relatively windy mountain roads and appropriate time should be budgeted for them. Be advised that the above can pose a safety risk, so when driving, stay alert and focused throughout the ride.

State Route 120 from the west from Oakdale. This is the fastest route from locations west (Bay Area) and northwest (Sacramento).

Route 120 is a bit steep, so RVs and trailers should consider Route 140 instead. In winter, snow makes the lower elevations of Route 140 more attractive.

State Route 140 west from Mariposa and Merced. This route mostly travels up the Merced River Canyon into Yosemite Valley and is the most scenic western entrance. RV and tour bus traffic used to congest this road a bit too much in summer. However, two new bridges to bypass a recent rock slide in the Merced River Canyon now limit vehicles to 45 feet.

Many visitors are still unaware of the new bridges over the Merced River and assume State Route 140 is still closed. Highway 140 is now pleasantly less congested and the bridges afford an excellent view of the massive rock slide.

State Route 41 north from Fresno and Los Angeles/Southern California. Be sure to fill your gas tank in Oakhurst (several stations along highway), or pay dearly as you get closer to the park. Note that many businesses (including two more gas stations) are located on the first half mile of ajoining State Route 49 in Oakhurst.

State Route 120 from the east (Tioga Pass Road) from Lee Vining and points east. This road is open when weather allows, as the Tioga Pass at 9,943 feet makes it the highest elevation served by CalTrans.

The road usually opens by Memorial Day and often stays open as late as Thanksgiving.

In general a car is a great way to tour the park, although during the summer Yosemite Valley can be so crowded that a shuttle bus is a prefered option. The Tioga Pass Road and the road to Glacier Point are seasonal and close upon the first major snow falls. Other park roads may close during storms, but in general are always open.

Another popular viewpoint is the Tunnel View. The spot gives visitors a view of the Yosemite Valley with El Capitan on the left, Bridalveil Fall on the right and Half Dome in the center. The view point is on the 41 at the western end of the Wawona tunnel. There is a small parking lot near the lookout.

During our trips to Yosemite, we have stayed in the park as well at hotel properties in Mariposa, Atwater and Mammoth Lakes. Our dining experiences have included an incredible meal at the Ahwahnee Hotel (now known as The Majestic Yosemite Hotel).

Photos of Yosemite from Our Road Trips to the Park

Half Dome in Yosemite National Park in California