Route 66 was one of the United State's first continuous stretches of paved highway, and served as a major path for those who migrated west.

"The Mother Road" was established on November 11, 1926, and ultimately stretched 2,448 miles from Chicago to Los Angeles.

From its beginning in Chicago, Route 66 headed south through Illinois and Missouri, and a small section of Kansas.

From there it turned in a more westward direction through Oklahoma and Texas, with the final stretches in New Mexico and Arizona before its termination point in Los Angeles.

The Lore of Route 66: The Main Street of America

Route 66 became one of the most famous roads in the United States, outdistancing others such as the Lincoln Highway.

It is popular lore in movies, songs, books, and TV shows. And the road was known far and wide for its variety of "mom and pop" motels, neon lights, drive-ins, flat tires, cars with no air conditioning, dangerous curves, steep hills, narrow lanes. The popularity stuck, and grew!

We've had the pleasure of driving the entire length of Route 66 through all eight states, The Main Street of America!

Visit our new website www.Route66RoadTrip.com for photographs, personal experiences, and commentary on the various segments of the Mother Road.

Map of Historic Route 66 from Illinois to California 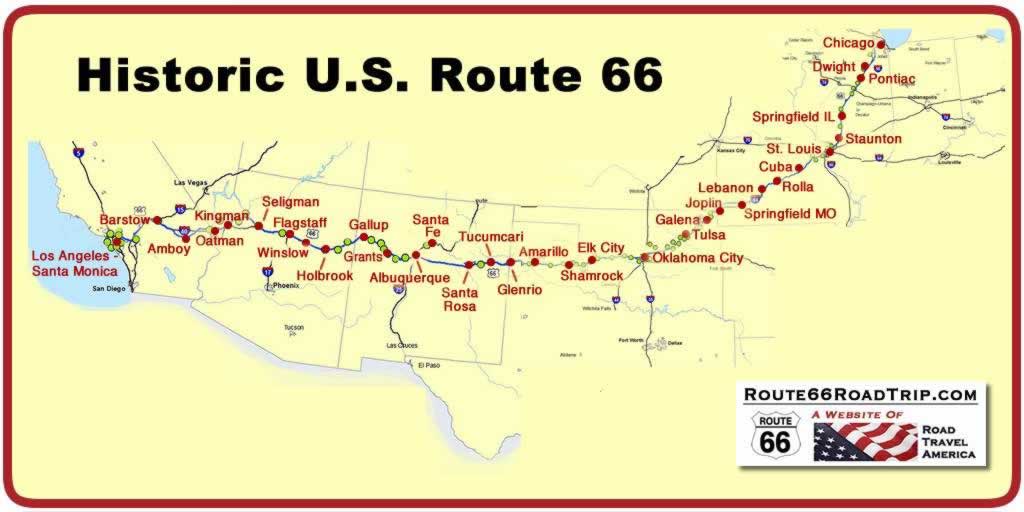 Road Trip Travel Guides for the States Along Route 66

Planning a road trip on Route 66? Here are the travel guides and reviews by state ... at our new website www.Route66RoadTrip.com.

A popular television show during the early 1960s bore the road's name: "Route 66". Starring George Maharis as Buz, and Martin Milner as Tod, the two young adventurers drove the road in their Corvette for 116 episodes.

Despite the name of the series, most episodes did NOT take place on the historic road, but in 25 different U.S. states.

The show was filmed mostly on location, and became known for its cinematography.

The interest in the show continues today by "Baby Boomers" who remember the original showings, and new generations of viewers fascinated by the show who watch it on DVD.

The Demise of Route 66

Route 66 underwent many improvements and realignments during its lifetime.

The passage of the Federal High Act of 1956 sounded the death knell for the old road, and gradually segments were replaced with new, safer superhighways.

Its final demise was the completion of the Interstate Highway System, and Route 66 was officially removed from the United States Highway System on June 27, 1985.

Today, several states recognize the historical significance of the road, and have it marked with "66" in the state highway number.

The road is also a major tourist attraction, so many states openly market attractions and lodging along the old route.

Along the length of Route 66, there are hundreds, probably thousands of attractions. And there are dozens of cities and towns.

Different travelers have different interests, so we can't list everything. But here are a few favorites! Let's get on the Road westbound ... starting in Chicago, Illinois.

The Blue Whale in Catoosa, Oklahoma on Historic Route 66 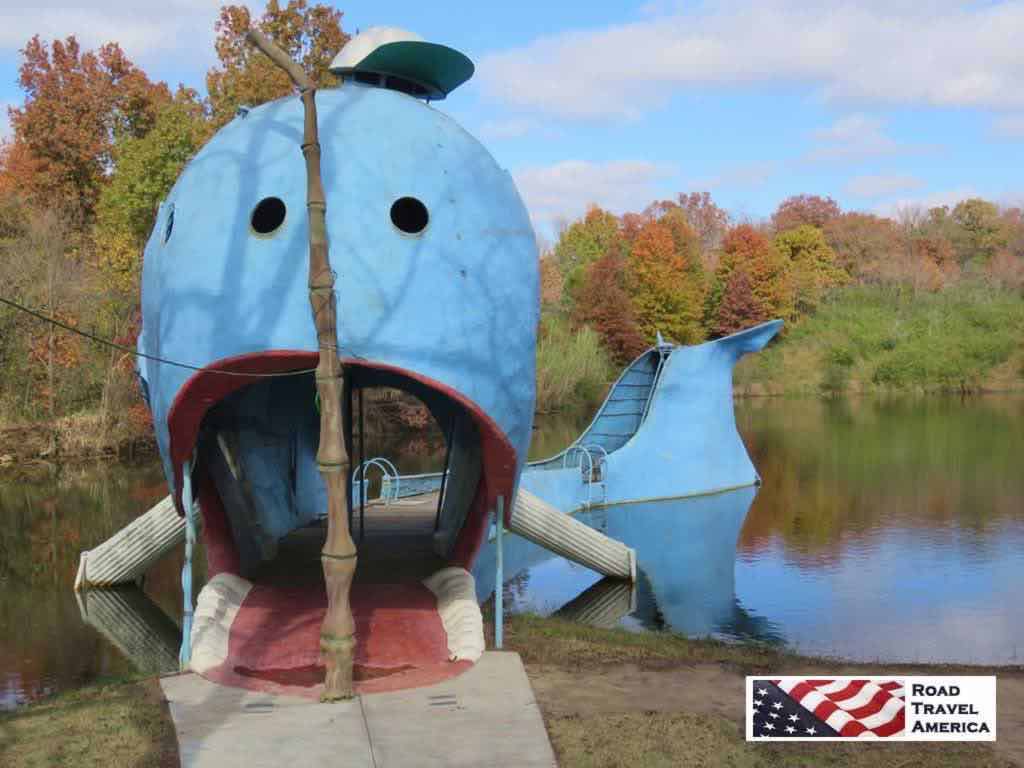 Touring Route 66 by RV or Automobile

Different people choose different modes of transportation to tour the Mother Road. While some elect guided bus tours, or drive their own vehicles, others seek new destinations in their RV or motor home.

And for those that don't own an RV yet, companies like Cruise America, El Monte RV Rentals, Road Bear RV Rentals, and Camping World offer a variety of RV sizes and rental plans.


The Cadillac Ranch, just west of Amarillo, on present-day I-40. Access is from the service road on the south side of the interstate. Park and walk across the field ... free admission! 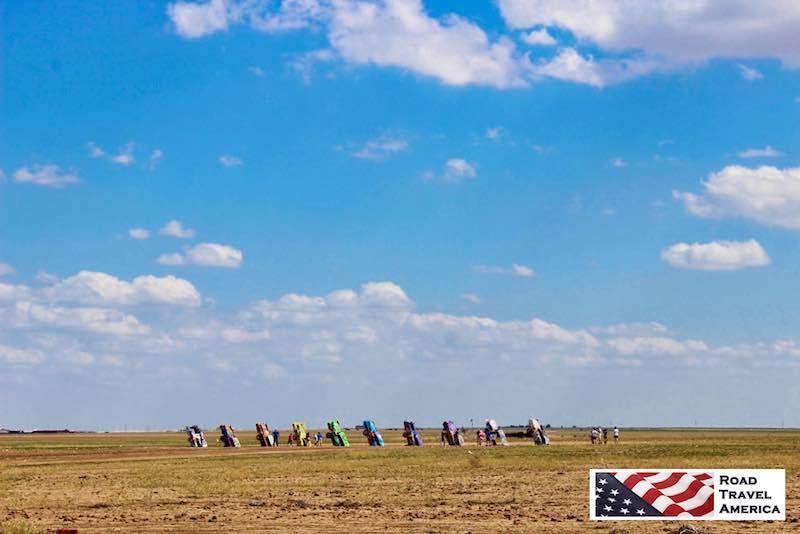 Get your motor running! Get out on the highway!

Many travelers on Route 66 ride their own cycles or rent motorcycles to seek new open-air adventures on their USA road trip!

A variety of motorcycle rental plans are available, such as those from Eaglerider Motorcycle Rentals.

Out West, your motorcycle can be picked up at a number of rental locations in Nevada, California, Arizona, New Mexico and Texas. If you are starting your Route 66 trip further north, motorcycle pickup locations in Illinois are available.

Model options are plentiful, and cycles from manufacturers such as Harley-Davidson and Indian are available. Trikes can also be rented.

If you don't want to ride independently, choose from one of many guided motorcycle tours. Self-drive tours often include rental of the motorcycle, hotel reservations and detailed tour route information.

The song "Get Your Kicks on Route 66" was composed by songwriter Bobby Troup in 1946.

It was first recorded by year by Nat King Cole, and sung by other singers over the years including Chuck Berry, Perry Como, and the Rolling Stones.

Now you go through Saint Looey
Joplin, Missouri,
and Oklahoma City is mighty pretty.
You see Amarillo,
Gallup, New Mexico,
Flagstaff, Arizona.
Don't forget Winona,
Kingman, Barstow, San Bernandino.
Won't you get hip to this timely tip:
when you make that California trip
Get your kicks on Route sixty-six.

Route 66 was one of the United State's first continuous stretches of paved highway, and served as a major path for those who migrated west.

"The Mother Road" was commissioned on November 11, 1926, and ultimately stretched 2,448 miles from Chicago to Los Angeles.

In 2026, the nation will be celebrating the Route 66 Centennial ... 100 years of the Mother Road serving the traveling public! Many states and organizations are planning special events and tours to highlight the Centennial.

Read more about the Route 66 Centennial and upcoming events that are already in the planning stages to help celebrate the 100th Anniversary.

Travel Guides for the States Along Route 66

Planning a Road Trip on Route 66? Here are travel guides for the major segments ...