Amarillo is the largest city in the Texas Panhandle, and the seat of Potter County. The Amarillo metro area has a population of over 300,000 residents.

Interstate Highway I-40 traverses the city east to west, much as Route 66 did in earlier years. I-27 heads south to Lubbock, while U.S. Highway 87 leads north to Dumas, Clayton and Raton.

Amarillo is the regional economic center for the Texas Panhandle as well as Eastern New Mexico and the Oklahoma Panhandle to the north. It is also a large medical center for the west Texas area.

It is often called "The Yellow Rose of Texas", and sometimes "The Helium Capital of the World".

The city is flush with historic sites, Route 66 memorabilia, hotels and restaurants, and lots of fun places to see.

It runs along an east-west axis through a grid system of streets between Georgia and Forrest Avenues. Developed as an early 20th century streetcar suburb, the district was transformed by the establishment of a national transportation artery running through its center. The road was originally paved with gravel in 1921.

Asphalt pavement on a concrete foundation replaced the gravel when the road became part of federally designated Route 66 in 1926. The commercial corridor was the first highway constructed to carry travelers out of Amarillo to the south and west.

The Historic District is Amarillo’s most intact collection of commercial buildings that possess significant associations with Route 66. Featuring elements of Spanish Revival, Art Deco, and Art Moderne design, these buildings represent the historic development phases of this early 20th century suburb and the evolving tastes and sensibilities of American culture.

The district is now a hub for nightlife and shopping, and tourism. The district hosts a number of festivals throughout the summer.

As one heads westbound out from Amarillo today on I-40 between exits 60 and 62, the Cadillac Ranch comes into view quickly, on the south side of the road, on a privately owned pasture.

This "interactive" folk art site of ten Cadillacs is the work of financier Stanley Marsh. Creators included Chip Lord, Hudson Marquez and Doug Michels, who were a part of the art group "Ant Farm".

It was created in 1974 and consists of what were old or junked Cadillac automobiles, many sporting those classic tail fins. The cars, from the 1949 Club Sedan to the 1963 Sedan de Ville, face west in a straight line.

The cars are half-buried nose-first in the ground, at an angle corresponding to that of the Great Pyramid of Giza in Egypt. As the city of Amarillo grew and encroached on the original site, the cars were moved two miles west to its current location in 1997.

Take exit 60 from I-40. Access is from the service road on the south side of the interstate. Park, cross over the fence gate, and walk across the field about 100 yards ... free admission!

Graffiti is allowed as you will quickly learn!

If you are traveling in a recreational vehicle or trailer, the Cadillac RV Park is located nearby, at the intersection of I-40 and Hope Road. A bit further west is the Oasis RV Resort. 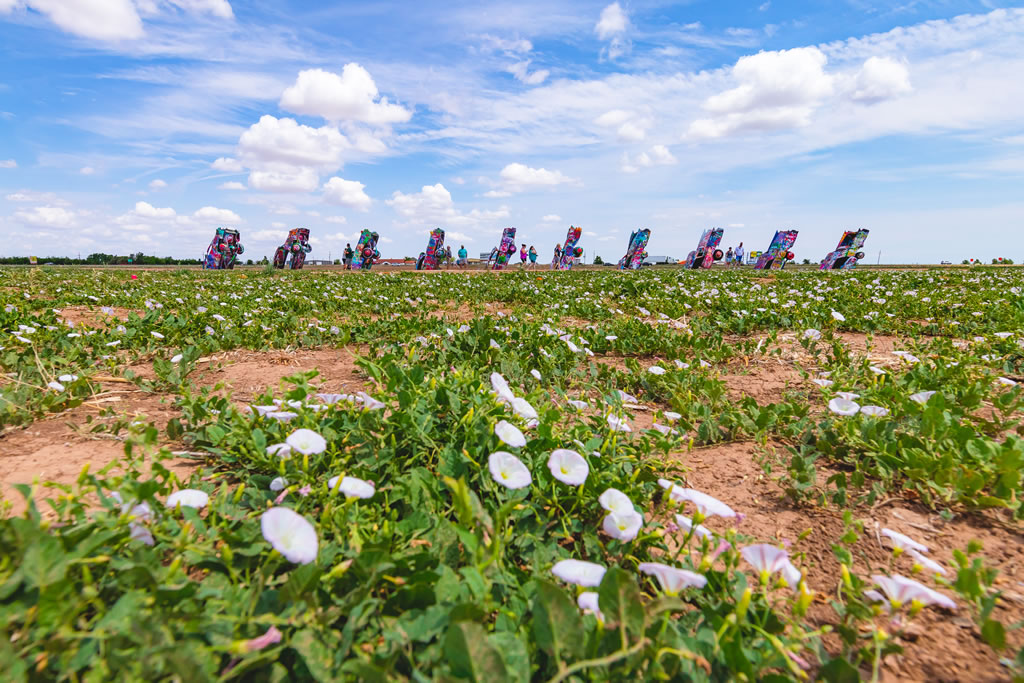 Located 25 miles south of Amarillo is Palo Duro Canyon State Park, the nation's second largest canyon system after the Grand Canyon. It is also 14 miles from the town of Canyon.

Palo Duro Canyon is the most spectacular and scenic landscape feature in the Texas Panhandle. It was formed by millions of years of water erosion by the Prairie Dog Town Fork of the Red River and the West Texas wind.

There is an 800 foot descent to the canyon floor and more than 16 miles of paved road. Palo Duro Canyon State Park offers fantastic scenic views, historical sites and markers, picnic tables, public restrooms and showers. It also features miles of hiking and biking trails, horseback riding, and a souvenir shop with grill. There are a variety of camping and parking areas suitable for day trips, overnight tent camping, or extended stays in the largest of campers and motorhomes.

The "Texas" Outdoor Musical runs Tuesdays through Sundays in the summer at the Pioneer Amphitheater in the park. Watch the stories, struggles and triumphs of early settlers. The family-friendly show has singing, dancing, fireworks and lots of Texas humor! 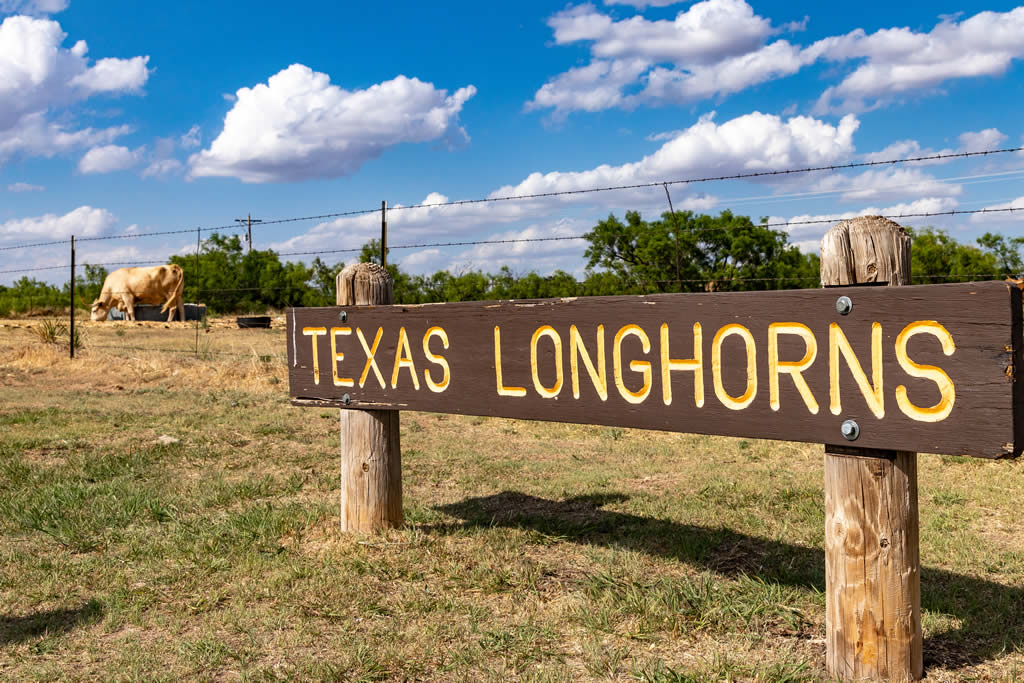 Modern-day travelers through the city probably also know about "The Big Texan" steak house! It was originally on Route 66, but is located today not far away, on I-40 ... it's a place many tourists to Amarillo want to check out.

In 1960 Bob Lee opened the famous Big Texan Steak Ranch on Route 66 in Amarillo. The Big Texan moved to the east side of Amarillo on I-40 in the 1970s.

It has grown beyond being just a large restaurant, and now features a brewery, gift shop, RV Ranch, motel and a concert venue. Read more at the BigTexan.com website.

Shown below is "The Big Texan as it appear today ... home of the free 72oz steak (with caveats)
(Photo by Jamie Hudson - Travel Texas) 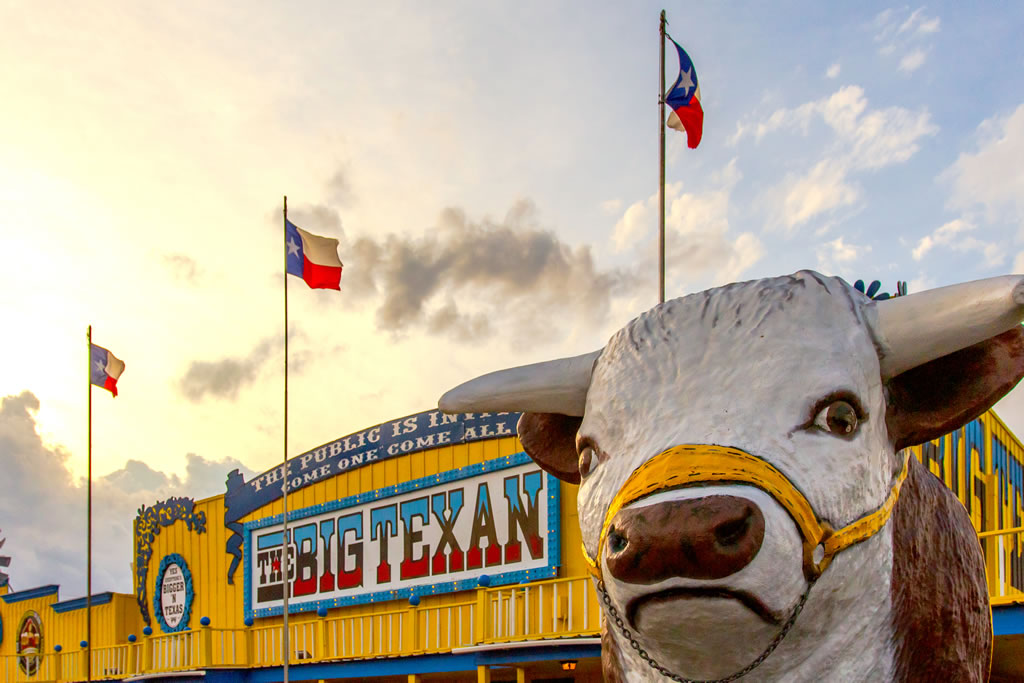 More things to See and Do in Amarillo

You are probably going to visit the Cadillac Ranch, and tour the Historic 6th Street District. And maybe eat at The Big Texan. But then what? There is lots more to do in Amarillo!

Other popular attractions include ...

We travel through, and to, Amarillo on a frequent basis. We have stayed there dozens of times over the decades. Today, the city offers more than 100 hotels and places to stay. It is a great stopping point for those traveling Historic Route 66, with not only many lodging options, but dining possibilities as well.

There are three primary clusters of lodging in Amarillo - downtown, on the east side of the city along I-40, and on the west side near Soncy Road (exit 64 from I-40). We prefer the Soncy Road area, near I-40 and the medical district, but that is just a personal preference.

Listed below are some popular lodging options, with reviews from TripAdvisor. NOTE: We have no affiliation with any of these properties, but only list these as a starting point in your lodging selection.

What was Amarillo like in its earlier days, driving to and staying in a motel? What did all the service stations, motels and diners look like when they were new?

What did the traveling public experience on the Mother Road? We wonder such things when we travel through Amarillo today.

Those earlier times in the 1930s, 40s and 50s were not always captured on film. But the use of colorful postcards was common in those decades.

We have included below a sampling of our collection of vintage travel postcards showing scenes in Amarillo.

These portray the historic road in its prime and help us to visualize "yesterday" as we drive around Amarillo today. 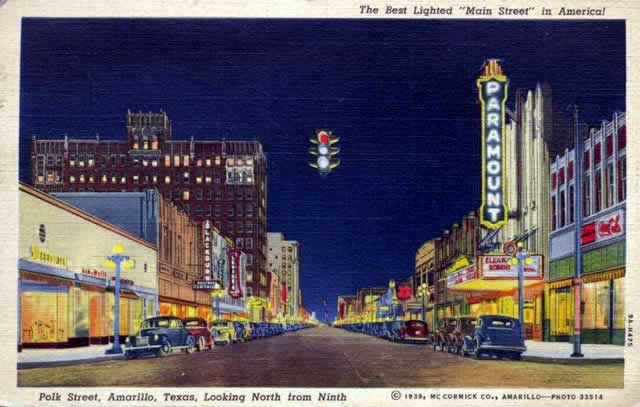