Capitol Reef National Park, located in south-central Utah, stretches about 60 miles in a north-south orientation. It is only about 6 miles wide.

The area was originally designated a national monument in 1937 by President Franklin D. Roosevelt to protect the area's colorful canyons, ridges, buttes, and monoliths. The area officially opened to the public in 1950.

The area was redesignated as a National Park in 1971 to preserve its 241,904 acres of desert landscape. It is open year-round.

Among the more popular attractions in the park is the Burr Trail. The road takes the adventurous traveler into some of Utah's most beautiful and extraordinary country, with views of the Henry Mountains, the colorfully contorted Waterpocket Fold, red Circle Cliffs, and Long Canyon.

The majority of the nearly 100 mile up-thrust formation called the Waterpocket Fold, a rocky spine extending from Thousand Lake Mountain to Lake Powell, is preserved within the park.

Numerous hikes and side trips are available for those with the time and inclination.

The park offers a wide range of things to do and activities, from hiking, biking, camping, eco tours and winter sports.

We have visited Capitol Reef on numerous trips, and have enjoyed its many attractions, tours, trails and outdoor activities. Often we stop there going to/from nearby Canyonlands, Zion and Bryce Canyon national parks. We've enjoyed our stays in nearby Boulder and Escalante along Utah Byway 12, and in Torrey.

Spend a day, or more, and enjoy and explore Capitol Reef National Park!

What to See and Do in Capitol Reef

Various vista points along this backway offer thrilling views of sprawling scenery of buttes, mesas, plateaus and mountain peaks. The Burr Trail traverses a wide spectacle of environments, starting from Boulder, and heading south to an intersection with Highway 276, just north of Bullfrog Marina on Lake Powell.

Waterpocket Fold is a colorful eroded fold of rock layers nearly 100 miles long but only a few miles wide. In Burr Canyon, the Navajo sandstone has been completely eroded away, leaving a huge notch in the Waterpocket Fold.

A variety of activities are available to visitors, both ranger-led and self-guided, including auto touring, hiking, backpacking, camping, bicycling, horseback riding, and rock climbing.

The Burr Trail in Capitol Reef

The Burr Trail, which ends (or begins) at Boulder, Utah, is one of our favorite back roads in the country. We have driven it several times, sometimes in a 4x4 Jeep, other times in a 2WD Toyota 4Runner.

It is typically quiet, with little or no traffic. In earlier years the entire length of the road was dirt; today parts are paved. The drive and views are stunning! The switchbacks are breathtaking!

The road which connects Boulder with Bullfrog, and passes through the painted rock country of Glen Canyon National Recreation Area, Capitol Reef National Park, and Grand Staircase-Escalante National Monument land is known as the Burr Trail.

The Burr Trail takes the adventurous traveler into some of Utah's most beautiful and extraordinary country, with views of the Henry Mountains, the colorfully contorted Waterpocket Fold, red Circle Cliffs, and Long Canyon.

Numerous hikes and side trips are available for those with the time and inclination.

Although in dry weather the Burr Trail is easily accessible in passenger cars, wet weather may make the road impassable even for 4WD vehicles. Recreational vehicles are not recommended.

County officials decided to pave the road from Boulder to the Capitol Reef National Park boundary a few years ago.

The famous Burr Trail switchbacks rise steeply up through the canyon. The trail drops nearly 800 feet in about a mile, while zigging and zagging down the Waterpocket Fold.

Originally, only the switchbacks were named the Burr Trail, a route used by cattlemen in the late 19th century to move cattle back and forth between winter and summer ranges. Today, the entire road from Bullfrog to Boulder is known as the Burr Trail, named after John Atlantic Burr, a local cattleman.

Map of the Burr Trail Switchbacks 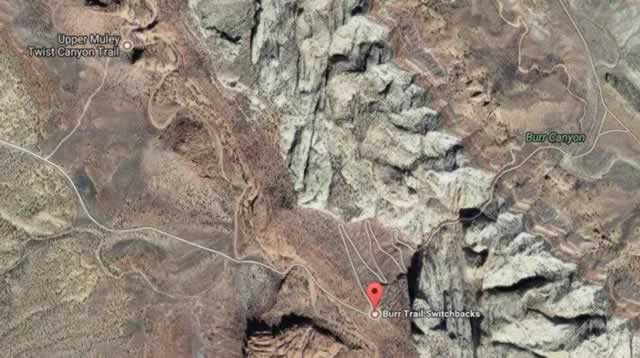 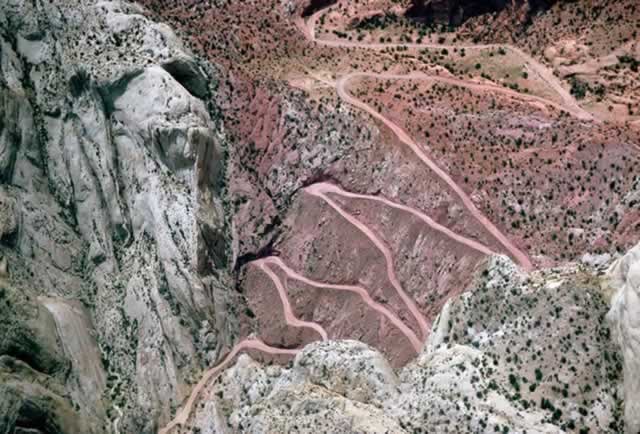 Driving the steep switchbacks down the Burr Trail in Utah ... all hands on the wheel!

Map of the Burr Trail from Boulder to Bullfrog, Utah (Courtesy of National Park Service) 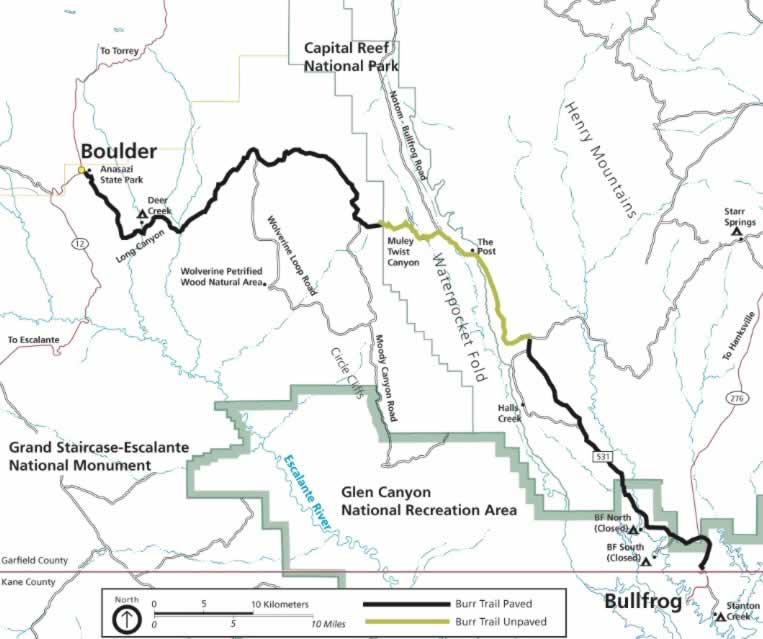 Photographs Along the Burr Trail


Lodging in and Around Capitol Reef

We have stayed at the Boulder Mountain Lodge during our trips to the area. It offers a variety of rooms and suites, on two floors. It is located at the head of the Burr Trail, at 20 North Highway 12 in Boulder. Phone 435.335.7460.

On the beautiful grounds is a pond, the well known and highly respected Hell's Backbone Grill, and an excellent gift shop.

On other trips to Boulder we have stayed at Pole's Place Motel located at 465 North Highway 12, across from Anasazi State Park. It was founded by Eugene Napoleon "Pole" Griffin, and is today owned by a fourth-generation Boulder family. The motel is small, clean and quiet, with free parking right outside your door. Phone 435.335.7422.

Other lodging and B&Bs are also available in the area, such as those in Escalante and Torrey. Several dining options are available including the Burr Trail Grill and Burr Trail Outpost, as well as the Hell's Backbone Grill and others.